Law reports and the doctrine of precedent

Case law, which is recorded in Law Reports series, provides the bulk of law in the United Kingdom and acts as a source of law through the mechanism of the doctrine of precedent. According to the doctrine of precedent a court is bound by the decisions of a court above it and, usually, by a court of equivalent standing. Superior courts have the power to overrule decisions of lower courts and in certain cases to overrule their own decisions.

It important to know in which court a decision was made, and to know that a Supreme Court (or House of Lords) decision is worth more than a decision made in the High Court. It is also necessary to assess the chances of a particular court not following one of its own decisions, as the rules on the application of the doctrine of precedent on this point may vary from court to court.

The Judicature Acts of 1873-1875 created a court hierarchy, which was completed when the House of Lords became the final Court of Appeal following the Appellate Jurisdiction Act 1876. The modern doctrine of the binding force of judicial precedent only fully emerged when there was good law reporting and a settled judicial hierarchy. 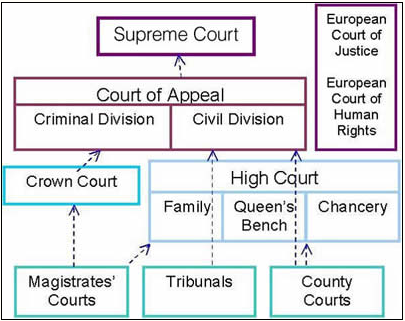 Structure of a law report

One of the first things a law student has to do is learn how to navigate and interpret a law report quickly. A law report is more than just the judgment. It begins with the names of the parties, the date of the hearing and the names of the judge or judges, and, usually, the court. Then follow catchwords, which are indexing terms and the headnote, which is a summary of the facts and the judgment by the barrister reporting the case. The Law Reports (Appeal Cases, Queens Bench, Chancery, Family etc) include the arguments of counsel.

The judgment sometimes begins several pages after the beginning of the report. The judgment is often preceded by the abbreviation cur adv vult (curia advisari vult, 'the court wishes to consider the matter') or 'Their Lordships took time for consideration' or 'The following judgments were handed down'.

Judgments in the Supreme Court (and, previously, House of Lords) are generally 'handed down' in print form. Judges in the civil and appellate courts (both criminal and civil) will usually reflect upon a case before reaching a final decision. They therefore hold back or reserve judgment until a later date. In criminal cases after the jury has reached a verdict in the trial court, the judge may sentence immediately or call for reports and sentence at a later date. In other courts, decisions of judges are delivered orally (extempore) and recorded verbatim by the court stenographer. Official and unofficial law reporters attend court and take shorthand notes.

The following is an excerpt from a typical law report, with the various parts indicated on the right, or you can watch this short video (opens in YouTube)

Law reporting was regularised in the late nineteenth century. Prior to 1865, barristers attended hearings and wrote up and published reports of cases, often under their own name. These reports are generally referred to as 'nominate reports'. The proliferation of these reports, and uncertainty about what constituted the authoritative report of the judgment, led to the establishment of the Incorporated Council of Law Reporting (ICLR) which publishes the Official Law Reports. Many older reports were collected together and published in 172 volumes as the English Reports.

About 2500 judgments (less than 2% of all judgments) are reported in law reports series each year. Decisions of the Supreme Court (previously House of Lords) and the Court of Appeal predominate because of the weight accorded them by the doctrine of precedent. Only a small proportion of the thousands of first instance cases in the High Court are reported. When the Law Reports, the most authoritative reports in England and Wales, were proposed in 1863, it was suggested that they should include all cases which:

Judges can recommend decisions for reporting, but this decision is generally made by the editors of the various law report series. This means that cases of specialist interest may be overlooked, whilst cases that add nothing new but give an impression of broad coverage may be included.

Many judgments are reported in more than one law reports series, some of which are more authoritative than others. For the fullest and most authoritative report read the Official Law Reports. The All England Law Reports or specialist reports are often cited on reading lists; generally speaking, the judgment should be the same in each report particulary for contemporary reports, although the headnote and other information included by the barrister who has prepared the report will be different.

The Hierarchy of Law Reports

Contemporary cases have three main elements in the citation: party names (in italics), the neutral citation, and the report of the judgment. For judgments prior to the introduction of neutral citations, cite party names (in italics), the report of the judgment and the abbreviated name of the court, in brackets. If you quote or paraphrase from a judgment you also need to provide a pinpoint.

The names of the parties in a judgment should be in italic or underlined. If there are multiple parties in a case, name only the first claimant and the first defendant, and use only surnames. Abbreviate terms such as Director of Public Prosecutions (DPP) and Company (Co).

A neutral citation identifies a judgment; it is perhaps mostly easily understood as a judgment number, even though it looks like a citation for a law report. The term 'neutral' is used to indicate that it is independent of any published report ('media neutral'). Neutral citations were first issued by the House of Lords, Privy Council, Court of Appeal and Administrative Court in 2001, and by all other divisions of the High Court in 2002. Tribunals and commissions also issue neutral citations.

When citing a report of a judgment, cite the 'best report' (as indicated in the hierarchy of law reports table above), giving the year of the volume, the volume number if there is one, the abbreviation of the law report series and the first page of the report. If there is no neutral citation (which will be the case before 2001), also indicate the court in brackets at the end.

Square brackets [ ] are used where the series has no consecutive volume numbers and the year is essential for finding the correct volume. So, the report of Donoghue v Stevenson is in the 1932 volume of the Appeal Cases, beginning at page 562, which is written [1932] AC 562. Neutral citations also use square brackets for the year.

The Official Law Reports, the All Englands and some other reports series that use the year as a volume number often have more than one volume each year. The volume number follows the year, after the square brackets. Annual volume numbers rarely go above 5.

Square brackets and round brackets are used in the same way in legal journal citations.

Quoting from judgments, or, using pinpoints

To reference quotes from judgments that don't have paragraph numbers, cite the page number after the court. The following example is citing a quote from or a reference to page 714 of the report..

If in the law library, you may prefer to use D Raistrick, Index to Legal Citations and Abbreviations (3rd edn, Sweet & Maxwell 2008), which is available at the Enquiry Desk.

For more information about abbreviations in neutral citations see bailii.