Studies of the Oxford Institute of European and Comparative Law is a series published by Hart Publishing which presents the research conducted at the Institute.

These are the latest books in the Series.

Property and Contract: Comparative Reflections on English Law and Spanish Law, edited by John Cartwright and Ángel M. López y López is the thirtieth volume in the series.

The book explores a range of comparative issues in, and in the relationship between, property law and contract law in English and Spanish law. It also draws on other jurisdictions. The purpose is to give readers access to discussions of these areas of private law that are not easily accessible elsewhere. It goes further, however, than simply setting our similarities and differences: it provides an insightful analysis of key points of interest in the comparison of the legal systems discussed.

Better Regulation in EU Contracted Law edited by Esther van Schagen and Stephen Weatherill is volume 29 in the Series.

The book is the first to provide a critical investigation of EU better regulation from the perspective of EU contract law. The Commission's 'New Deal for EU Consumers' is one of the first EU contract law initiatives to implement both the newly revised Better Regulation Guidelines and the newly introduced combined evaluation of multiple Directives in the form of a 'fitness check'. This offers an opportunity to explore difficulties and best practices at a national level, as demonstrated by experience with the EU's Unfair Terms Directive. Both the fitness check and the impact assessment accompanying the New Deal should facilitate critical reflection on the design of EU contract law. The book addresses key questions. Do impact assessments favour business interests at the expense of a high level of consumer protection? Is the evaluation of EU contract law and the analysis in impact assessments in line with scientific standards? Has the fitness check revealed difficulties and success stories with EU measures at national level, and thereby facilitated anin-depth scrutiny of the design of EU contract law? Ultimately, is the potential of better regulation being realised? 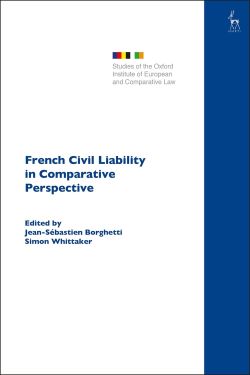 The 28th volume in the series is French Civil Liability in Comparative Perspective edited by Jean-Sébastien Borghetti and Simon Whittaker.

The French law of torts or of extra-contractual liability is widely seen as exceptional. For long it was based on a mere five articles of the Civil Code of 1804, but on this foundatuion the courts and legal scholars have constructed liabilities for fault and strict liability of an extraordinary breadth and significance. While the rest of the general law of obligations (including contract) in the Civil Code was reformed in 2016 by executive ordonnance, this area was left aside, being the subject in 2017 of a proposal by the French Government for the legislative reform of the law of civil liability, a new legislative category to include both contractual and extra-contractual liability. This work considers important aspects of this developing area of French law in a series of essays by French lawyers and comparative lawyers working in French law and other civil law systems. In doing so, it provides insights into the doctrinal thinking and judgments of French lawyers as well as the possible directions in which this area of the law may be developed in the future.

The 27th volume in the series is New Economic Constitutionalism in Europe by George Gerapetritis.

Discretion in EU Public Procurement Law, edited by Sanja Bogojevic, Xavier Groussot and Jörgen Hettner is the 26th volume in the series.