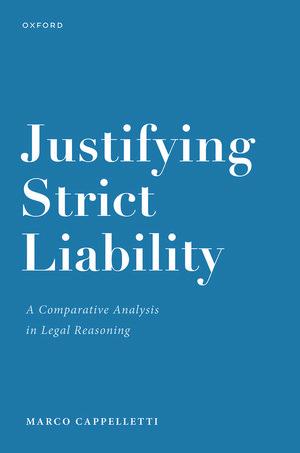 Dr Marco Cappelletti, Junior Research Fellow at St John’s College and Research Fellow at the Institute of European and Comparative Law within the Law Faculty of the University of Oxford, has been awarded the prestigious Grand Prize of the International Academy of Comparative Law, also known as Canada Prize. The announcement was made during the General Assembly of the Academy held on 28 October 2022 in Asunción, Paraguay.

The Canada Prize has been in existence since 1994 and is awarded every four years at the General Congress of Comparative Law held under the Aegis of the Academy. The Prize is intended to recognize an original legal work of high scientific quality, written in English or French, in which the common law and the civil law systems are the subject of a critical comparative study in a field of private or public law, although other legal systems may also figure in the study.

The Jury decided to award the Prize to Dr Cappelletti for his monograph entitled Justifying Strict Liability: A Comparative Analysis in Legal Reasoning, published by Oxford University Press in June 2022. The study explores in a comparative perspective the most significant justifications that are put forward to justify strict liability in tort law in four legal systems, two common law (England and the United States), and two civil law (France and Italy). These justifications are risk, accident avoidance, the “deep-pockets” rationale, loss spreading, victim protection, reduction in administrative costs, and individual responsibility. The book discusses these arguments comparatively by illustrating and contrasting their usage and significance across the four laws. The overall aim of the book is to advance our understanding of strict liability, to shed new light on the arguments used to justify strict liability across the four legal systems and, therefore, to improve our comprehension of the tort cultures featuring within them.

As Dr Cappelletti highlighted in his acceptance speech at the award ceremony, “analysing these justifications one by one in a comparative perspective brings to light a complex picture of the reasoning in strict liability, in which we can observe lots of differences and similarities across legal systems in terms of both the patterns of use and the significance of each argument”. The analysis shows that there is an intimate relationship between the arguments for strict liability and the wider values and goals that characterise the four legal systems, such as the value of social solidarity, the goal of economic efficiency, or the fulfilment of moral norms of personal responsibility. What emerges is a two-way relationship between the arguments and the broader values and goals: the use of specific arguments sheds light on the values and goals to which legal actors are committed; at the same time, these values and goals provide a specific connotation to the arguments, and so the same justification will be understood and used differently in the hands of legal actors who proceed from different commitments.

In awarding the Prize to Dr Cappelletti, Professor Blom, on behalf of the Jury, described the award-winning book as “truly original” and as “a really novel contribution to the literature”. In the Jury’s view, the book is “very lucidly argued”, and “the analysis is very subtle, neither artificial, nor forced”. Dr Cappelletti “applies his analytical method to an extraordinary array of sources, both judicial and scholarly, in (at least) three languages”, and he provides “very accurate concluding remarks on which he builds his comparative demonstration”.

Institute of European and Comparative Law