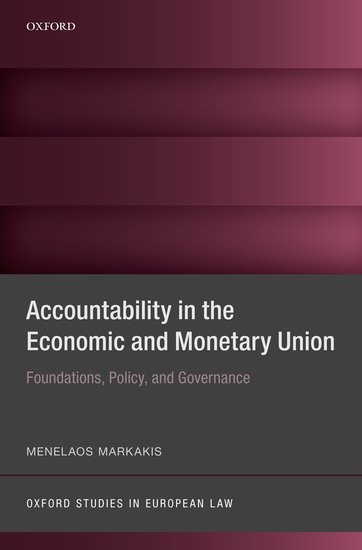 Following the financial and public debt crisis, the EU's Economic and Monetary Union (EMU) has been under intense political scrutiny. The measures adopted in response to the crisis have granted additional powers to the EU (and national) authorities, the exercise of which can have massive implications for the economies of the Member States, financial institutions and, of course, citizens. The following questions arise: how can we hold accountable those institutions that are exercising power at the national and EU level? What is the appropriate level, type and degree of accountability and transparency that should be involved in the development of the EU's governance structures in the areas of fiscal and economic governance and the Banking Union? What is the role of parliaments and courts in holding those institutions accountable for the exercise of their duties? Is the revised EMU framework democratically legitimate? How can we bridge the gap between the citizens - and the institutions that represent them - and those institutions that are making these important decisions in the field of economic and monetary policy?This book principally examines the mechanisms for political and legal accountability in the EMU and the Banking Union. It examines the implications that the reforms of EU economic governance have had for the locus and strength of executive power in the Union, as well as the role of parliaments (and other political fora) and courts in holding the institutions acting in this area accountable for the exercise of their tasks. It further sets out several proposals regarding transparency, accountability, and legitimacy in the EMU.

Joining Dr Menelaos Markakis (Erasmus University Rotterdam) to talk about his book. The discussants of the book will be Professors Paul Craig (University of Oxford) and Alicia Hinarejos (McGill University).

This event is open to everyone will be a hybrid event. For those of you based in Oxford, please join us at Brasenose College (Platnauer Room – the Porters will direct you). Alternatively, you can join us online via Teams. To register for the event to attend online, please use the following link:

https://forms.office.com/Pages/ResponsePage.aspx?id=G96VzPWXk0-0uv5ouFLPkXzSSNtT1sVOvHoehAWw6jFUMUVINkxXQVUwMzExNzRSNDlHTjlZWFE3WS4u
If you want to come in person there is no need to register – just show up!
P.S. All our seminars are preceded by a light sandwich lunch from 12.30 – 13.00, offered to you by the Discussion Group.
In this section